Is John Chow Legit or Can He Teach You to Earn Millions with Your Blog? 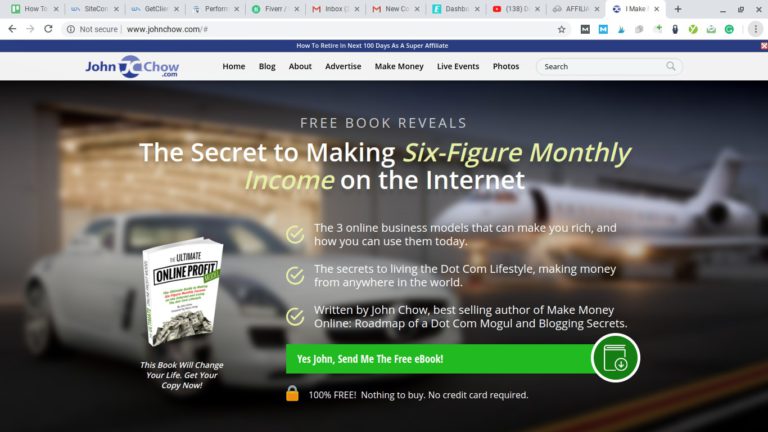 Home » How To Entrepreneur Full Library – Articles to help Start or Grow a Business » Is John Chow Legit or Can He Teach You to Earn Millions with Your Blog?

If you’ve ever asked “Is John Chow Legit?”, you’re in the right place because I’ll be answering that question very thoroughly here.

When you’re looking to learn how to start or grow a business online, there are hundreds of thousands of people and methods you might run into. Many that you’ll encounter won’t work and others are downright scams. For this reason, you have to be very careful to verify those who you choose to learn from, and not solely base their credibility on how much income they’ve earned.

If you’re here, it’s likely, you came across John Chow or JohnChow.com thru Google, Youtube, or on social media. You’ve probably seen his story of going from $0 to over $100,000 per month in two years, and you want to know if you can follow his advice and get comparable results. Most people would even be happy with a percentage of his monthly income, or enough to support their families, but can you get those types of results from following his recommendations?

In this John Chow review, I will tell you:

Who is John Chow? An Overview

There are few bloggers who can say they’ve been earning money thru their blogs for nearly 20 years. In fact, Google was just founded in 1998 and didn’t start to really take off until the 2000’s, so bloggers who have been around for 20 years practically saw the birth and massive spread of the internet across the world! They can truly attest to the growth and opportunity we have to start businesses online.

John Chow is one of those “old school” bloggers whose been around for awhile. He started doing business in 1998 and has since helped lots of people learn the possibilities of making money online. His story of going from $0 to over $100,000/mo has been used numerous times to inspire people to understand the power of marketing online and online entrepreneurship.

Here’s a video explaining what John Chow is all about:

How Does John Chow Make Money?

John Chow has used many different monetization methods over the years: some have been found ethically questionable and some have been valuable to his audience.

He has information posted on his blog to give you approximate numbers of his readers, subscribers, social media followers, and so on. I would recommend you already have your owned media channels (website, podcast, video channel) and earned media channels (shares, likes, social media following, etc.) running first, then request updated information that demonstrates his reach and engagement at JohnChow.com before investing into advertising there because traffic, subscribers, and various metrics can fluctuate, and you want to make sure you’re ads will have the highest chances of success.

In addition to advertising, John Chow earns a large percentage of his income by referring people who come to his site to products or services thru affiliate marketing. He’s been known to promote products like:

In his videos, he says he chooses affiliate programs based on three factors. He wants:

As a result of the criteria he uses to choose affiliate programs, he’s been known to recommend some sub par products and services with high commissions such as MOBE. He currently promotes:

John Chow, MOBE, and the FTC

MOBE is one affiliate program that earned John Chow over $1 million in sales, and later was shut down by the FTC. Many people lost their hard-earned money because they believed the sales pitches and promises that MOBE gave, but it was found by the US Government to be a scam. John Chow was a top earner in MOBE and promoted their program until they were shut down, then afterwards, he removed traces of those promotions from his blog.

His involvement with MOBE and the fact that he didn’t later apologize for referring people to a business that didn’t uphold their promises makes many people question John now, and diminishes his trust with many people. As a leader, sometimes, we make mistakes, but it’s important to own them and to try to rectify the issue with those that were hurt.

Wealthy Affiliate was a strong force telling people about the scamming going on with MOBE. Many third party reviewers from Wealthy Affiliate withstood the harrassment, bribery, and legal threats because they didn’t want people to risk losing their money on an obvious scam.

In fact, the owners were taken to court to be sued by MOBE and were found innocent of charges that MOBE tried to place against them. They spent over half million dollars defending themselves and despite having no involvement with promoting MOBE or doing business with them, they took the court costs that were reimbursed to them, and they donated them to MOBE victims who lost their money to the scam.

Who is Ideal to Learn from John Chow?

Now, he refers people interested in learning how to make money with affiliate marketing to Clickfunnels because they have training by Russell Brunson done there.

What Does John Chow Do Well

What Doesn’t John Chow Do Well

My Final Opinion of John Chow

As you can see from the situation with MOBE, there are many ways to earn money, but not all of them are ethical, and John Chow’s story is just one example of that.  If you want to know the components of a successful business so you can build one (even your own laptop lifestyle), you can check out my free 10-step guide on how to grow a business from idea to enterprise here.

If you read thru the post and you want an alternative to learn how to start an online business, there are other routes. I recommend programs that:

If you want to learn how to start an online business or how to make money online, Wealthy Affiliate is my #1 recommendation.

I offer 1-on-1 private message coaching to all premium referrals at Wealthy Affiliate. In addition, you’ll also have access to these membership benefits:

John Chow offers helpful videos and blog posts, but if you want a more comprehensive experience, Wealthy Affiliate may be a good route for you. Here are some of the differences in following John Chow versus Wealthy Affiliate:

John Chow creates helpful content, but at this point, he doesn’t have a program to teach you online business: from start to mastery.

Other Alternative Products I Recommend

In case you still want to shop around for internet marketing courses, here are some other course options I recommend:

Can You Earn Millions by Following His Recommendations? Possibly, but I wouldn’t recommend you try that. 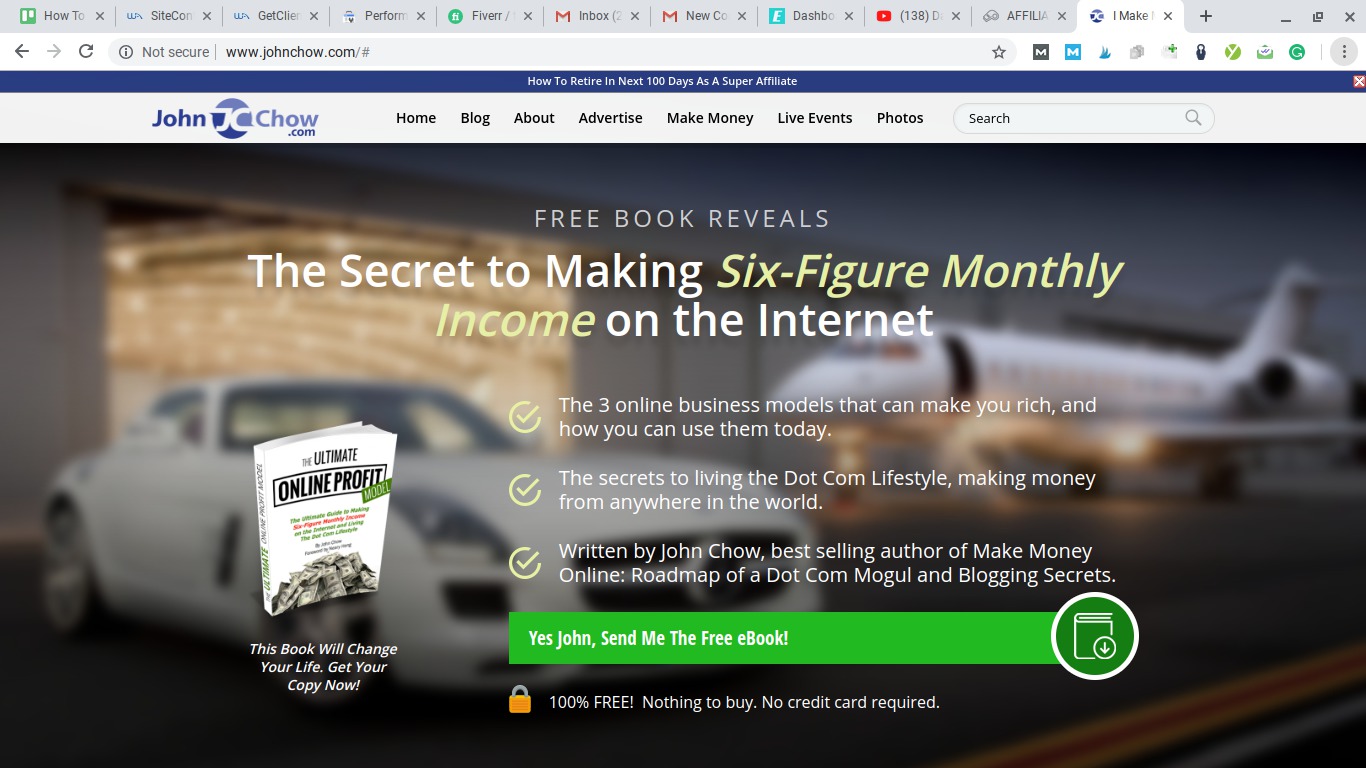 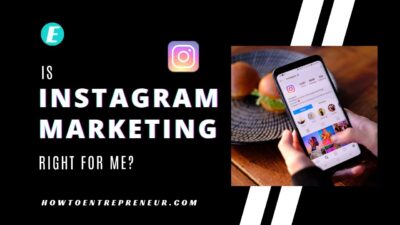 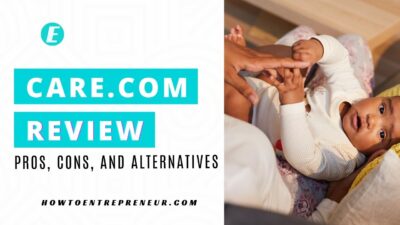